And The New Miss Tuolumne County Is… 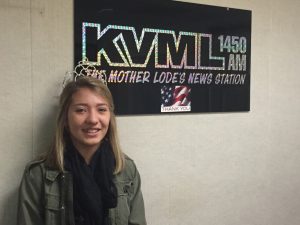 Orman was Thursday’s KVML “Newsmaker of the Day”.

Fifteen year old Orman was crowned as Miss Tuolumne County on Saturday October 15th. She was competing against another lady for the title, sash, crown, plaque and the $250 scholarship.

According to Orman, a morning interview was worth the most points during the pageant. Orman performed a musical theater dance during the talent portion.

As far as future plans, Orman would like to go to a four year college and major in both Dance and Business, so that she can eventually own a dance studio.

The first public appearance for the new Miss Tuolumne County will likely be on the day after Thanksgiving, as she participates in the Sonora Christmas Parade.