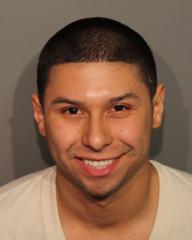 Angels Camp, CA – Following a traffic stop on a vehicle missing a front license plate police arrested a man with drugs, allegedly for sale, apparently heading to party with juveniles.

According to Angels Camp police, the incident happened in the early hours over the weekend as they stopped a man later identified as Paul A. Gregorio, of Stockton, in the 1300 block of Bird’s Way. Police reported that he appeared to be following another vehicle to the end of the street. The occupants of the first vehicle exited the car and indicated that they were heading to a nearby residence.

Police say while speaking with Gregorio, they detected alcohol on his breath. While conducting field sobriety tests, they also located narcotics on the ground near where the tests were being administered and recovered two baggies of suspected cocaine. At the conclusion of the field sobriety tests Gregorio was arrested for suspicion of driving under the influence of alcohol. While talking with the front seat passenger, police smelled marijuana coming from inside the vehicle and subsequently searched it. They turned up an open container of cognac as well as a digital scale with suspected cocaine residue and a large jar of marijuana that they entered into evidence.

According to police, it was determined that Gregorio had also planned to head to a Bird’s Way residence, so they proceeded to it, finding three juveniles, none of whom lived there and all of whom had been consuming alcohol. Police say they then contacted their parents, who responded to pick up their children.

Along with DUI, Gregorio now faces charges of possession of a controlled substance; possession and transportation of cocaine for sales; possession of more than one ounce of marijuana as well as possession and transportation for sales; contributing to the delinquency of a minor and destruction of evidence. In connection with the incident Paige C. Crowe, 21, of Angels Camp, was arrested, cited and released on charges related to contributing to the delinquency of a minor.