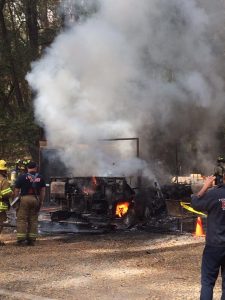 RV and shed fire in Columbia

Columbia, CA — Firefighters from across the area helped extinguish a fire Thursday afternoon that destroyed an RV and shed.

The fire ignited at around 1pm  at 23257 Woods Creek Way. Both air and ground resources were dispatched. Agencies that responded included Columbia Fire, Tuolumne County Fire, Sonora City Fire, CAL Fire and a Sierra Conservation Center Crew. The Tuolumne County Sheriff’s Office responded as well, but were released when it was determined that no evacuations were needed. What ignited the fire remains under investigation. No injuries were reported.