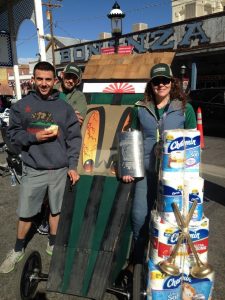 Twain Harte, CA — What is deemed as the top prize in the world when it comes to outhouse racing is returning to its rightful place in Twain Harte this year.

For the second year in a row, a team entered by the Twain Harte Rotary Club won the top prize at the World Championship Outhouse Races in Virginia City, Nevada. There were 22 entries and approximately 3,000 in attendance to watch the two day event, which took place last weekend. The winning entry, Dung Fu Warrior, was driven by Elyce Northcutt and pushed by Colman Henley and Colton McMullen.

Locally, for the past three years, the Twain Harte Rotary Club has been hosting the Royal Flush Crapper Derby during the first weekend of June. Current Board President Terry Northcutt says the event, combined with taking part in the competition in Virginia City, has brought additional attention to the community. Northcutt adds, “We have people that are coming here now that didn’t realize what Twain Harte is about and the type of fun we have here in Tuolumne County.”

The Twain Harte event started in 2014 after the Rim Fire and government shutdown. Northcutt said the group wanted to find a way to let the community “let off some steam,” if you will, and start the healing process. The event has been growing in size ever since.