Update: Power Back On In Sonora 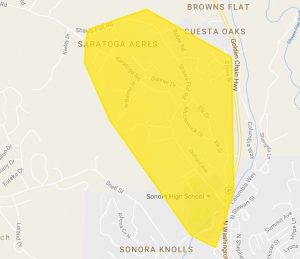 Update at 6:50 p.m.: After being without electricity for about two and a half hours, 471 PG&E customers in the Sonora area are out of the dark. The lights went back on just before 7 p.m. Tuesday. The company has not released a cause for the outage, which began just after 4:30 p.m.

Update at 6 p.m.: Sonora High School Principal Ben Howell has just informed Clarke Broadcasting that all volleyball games scheduled for tonight have been canceled due to the outage, which is impacting 471 customers in the Sonora area. PG&E has no cause but estimates power will be restored in the eight o’clock hour.

Original post at 5:45 p.m.: Sonora, CA — PG&E has crews checking on an outage in the Sonora area affecting 471 customers.

Sonora High School is also without electricity. The power outage stretches from Shaws Flat Road to Snell Street and West Banner Drive to Columbia Way. The company has no cause for the power failure at this time. A crew is headed to the scene to investigate and determine caused the lights to go out. PG&E gives an estimated repair time of 8 p.m.