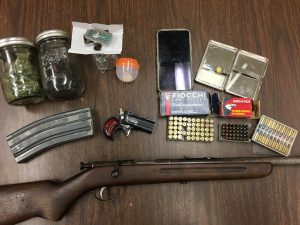 Guns and drugs seised by ACPD

Angels Camp, CA — An officer investigates a suspicious vehicle parked in Angels Camp and sniffs out a crime that nets drugs and a guns.

The incident happened on Monday just after 9 p.m. in the 1600 block of Finnegan Lane between Gold Cliff Road and Finnegan Court. An Angels Camp officer noticed the vehicle with three people inside. While questioning the individuals the officer discovered one passenger was a juvenile and also detected the odor of pot.  A search of the vehicle found not only marijuana, and methamphetamine but guns and ammunition too.

The driver, Jordon F. Peters, 20, from Oceanside and passenger Brooke L. Hines, 18, from Angels Camp, were charged with possession of a controlled substance, possession of narcotic paraphernalia, and contributing to the delinquency of a minor. A 17-year-old minor, also a passenger in the vehicle, was cited but released to the parents.

Peters told the officer he had the firearms for a hunting trip. The guns were confiscated for safekeeping, according to Angels Camp Police.