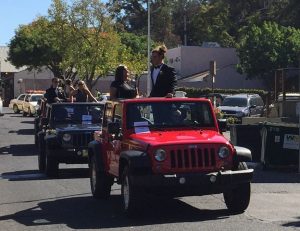 Sonora, CA– The streets of downtown Sonora closed and became crowded with Sonora High School Wildcat fans at 2:00pm for the Homecoming Parade. Students in the Golden Regiment Band marched down Washington Street and many other students rode on various vehicles. Shop windows in historic downtown Sonora have been decorated with displays of this year’s theme: arcade games. The four class floats were decorated as Galaga for the Freshman, Donkey Kong for Sophomores, Pac Man for the Juniors, and the Senior’s float has a Mario theme.

The band, homecoming court, cheerleaders and football players are all seen in the photos and video of the parade.

Tonight at Homecoming the Wildcats football team will take on the Amador Thundering Herd on Dunlavey Field. Sonora has won all their games, Summerville, Bret Harte and Calaveras have each lost only one game this season. The junior varsity teams will play at 5:30 p.m.; the varsity game gets underway at about 7:00 pm. During Sonora’s varsity game half time the homecoming queen will be crowned and after the game students are welcome to attend the annual Homecoming dance.

Bret Harte is also hosting its Homecoming game tonight against Winters, and will crown the homecoming queen between the JV and Varsity game, the Homecoming Dance will start at 9:00 and end at 11:00 pm. Summerville will be playing Linden at Home tonight but their Homecoming is not until October 22nd and Calaveras is October 28th.