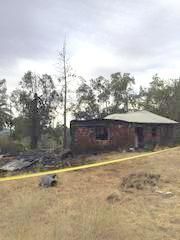 According to Angels Camp Fire Dept. officials, its units were dispatched, along with resources from the Altaville Melones, San Andreas and Murphys fire protection districts and CAL Fire to the Angels Camp incident, located in the 1600 block of Mountain View Road. Arriving onscene they found a vacant single family residence reportedly 80 percent engulfed in flames.

Fire officials state that firefighters were able to confine the fire to the residence with no extension to any surrounding vegetation. However, due to the extreme heat of the blaze, two neighboring houses sustained minor exterior damage. While the residence has already been deemed a total loss the cause of the fire is still under investigation.