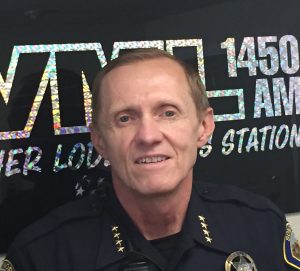 Sonora, CA – After eight years as the top cop in Sonora’s Police Department, Chief Mark Stinson has announced he will be retiring at the end of this year.

Stinson joined the Sonora PD in 2005, and he became the Chief in 2008 following the retirement of Mace McIntosh. His career spans 36 years as he began policing in 1980. Before heading to Sonora, Stinson was the Supervising Investigator at the Shasta County District Attorney’s office heading up a division of fourteen investigators. He noted he has mixed emotions about leaving law enforcement, “I’m kind of excited in one way and kind of sad in another. I’ve been doing this for 36 years now. I’ve seen a lot of changes…some good some bad. I’m getting ready to examine a new chapter in my life and getting excited about that. “

Chief Stinson says he does not have any definite plans but will most likely be leaving the area. His last day will be December 16th. Clarke Broadcasting contacted City Administrator Tim Miller for a comment on whether a search has started for Stinson’s replacement but Miller was out of the office Tuesday.