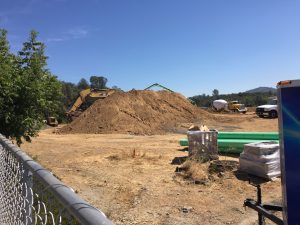 Standard, CA — Heavy construction is underway in Standard next to the AM/PM gas station and mini-mart.

According to Tuolumne County Community Resources Agency Director Bev Shane, a building permit was recently issued for a Les Scwhab tire center. She points out that it is part of the larger development reviewed and approved by the county in 2010 that includes the mini mart and adjacent (McDonalds) restaurant space.

Les Schwab has around 450 locations nationwide, including in nearby Oakdale and Jackson. The plans submitted to the county include a 10,000 square ft. building with six bays.