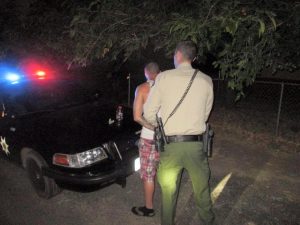 Tuolumne County, CA — A 28-year-old man from Oakdale was booked into Tuolumne County Jail in connection to a pair of weekend burglaries.

The Sheriff’s Office received a report Saturday that items were stolen from two campsites at the Moccasin Point Campground. A state park Ranger made the report and noted that the alleged suspect left in a red 1994 Chevrolet truck. The vehicle was shortly located on Jacksonville Road in Jamestown, and two occupants were inside, 28-year-old Joshua Labass of Oakdale and an unidentified 17-year-old female.

The stolen items taken earlier in the afternoon were located inside.

Back at the campground park rangers secured a jet ski that Labass was spotted using before he took off in the truck. A records check determined that the jet ski had been reported stolen to the Sheriff’s Office back in August. The Sheriff’s Office reports that an investigation is also underway regarding the suspect’s connection to recent houseboat burglaries in the area.

The 17-year-old female was turned over to an adult family member, and Labass was booked into county jail.