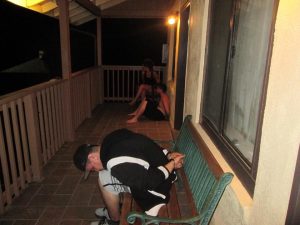 Sonora, CA — The Tuolumne County Sheriff’s Office received a tip about a suspicious person in Jamestown, and three people ended up being arrested on a variety of charges.

Deputies responded this week to the Miners Motel in Jamestown because a 22-year-old Escalon man, Cody Lane, was reportedly loitering and acting suspiciously. Deputies spoke with Lane and found him to be in possession of a hypodermic needle. The deputies then spoke with two additional people at the motel with Lane, 25-year-old Nicholas Perez of Lodi and 32-year-old Ashley Wheeler of Modesto. They both were on probation out of Stanislaus County.

The Sheriff’s Office searched both their room and vehicle and found several more hypodermic needles, suspected stolen property, false registration, burglary tools and drug paraphernalia.  All three suspects were arrested and booked into Tuolumne County Jail. An investigation is ongoing in regards to the suspected stolen property that was located during the search.