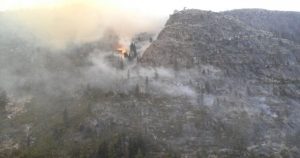 Alpine County, CA — The Mokelumne Fire burning in the Stanislaus National Forest is up to 70-percent containment and 655 acres.

The fire was ignited by a lightning strike on August 18 and is being managed for ecological benefit. The Forest Service reports that two firefighter injuries have been reported to this point, but no specific details have been released. There are 36 firefighters currently assigned to the incident, two helicopters and three hand crews. Cooperating agencies include the Eldorado National Forest, Alpine County Sheriff’s Office, PG&E and others. Most of the fire’s edge is surrounded by natural barriers. Full containment is still anticipated by September 20th. Some drift smoke has been visible at times along stretches of Highway 4 Ebbetts Pass.