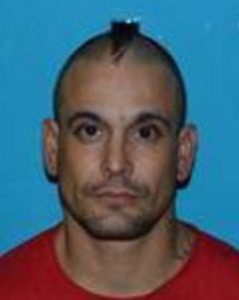 Sonora, CA — The Tuolumne County Sheriff’s Office is asking for help from the public in locating a man that escaped following a chase in east Sonora.

The Sheriff’s Office attempted to pull over 33-year-old Garrett Bryce Fagundes of Denair in a 1995 Chevy truck for failing to properly signal near the intersection of Mono Way and Peaceful Oak Road. It happened Sunday at 6:45pm. Fagundes pulled over to stop, but then accelerated after the deputy stepped out of the patrol car. The driver took off and drove through several nearby red lights. He then jumped out of the truck and took off running on foot. Other law enforcement agencies responded and started to set up a perimeter around the area. However,  a witness told officials that Fagundes was spotted getting into a 2002 Chevy Tahoe with 37-year-old Carol Nicole Hardin of Sonora. The two remain at-large and the license plate associated with Hardin’s Tahoe is 7NUX215. Anyone with information on their whereabouts should contact the Sheriff’s Office at 209-533-5815.

A billy club was found in the abandoned vehicle of Fagundes, as well as drug paraphernalia. Fagundes is described as being, 5’7”, weighing 165 pounds, with an average build, multiple tattoos, brown eyes, and short brown hair.