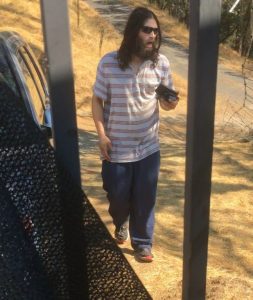 San Andreas, CA — The Calaveras County Sheriff’s Office is investigating a crime that occurred in the 3000 block of Central Hill Road in San Andreas.

A victim reported that an unknown man and woman tried to hold him at gunpoint, and they stole $19,000 worth of marijuana plants. The suspects reportedly approached the victim on his property and asked for directions. The two sides got into an argument and the man and woman were asked to leave. Instead, the male suspect retrieved a gun from his vehicle and ordered the victim to the ground. The female suspect also retrieved an unknown object from the vehicle, and pointed it at the victim.

The victim took off running to an adjacent property and dialed 911. The two suspects took the plants and fled the area in their Toyota SUV.

If you have any information regarding this incident, or can identify the subject in the photo, you are asked to call the Calaveras County Sheriff’s Office at 209-754-6500.