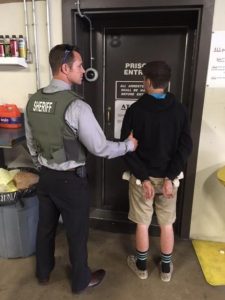 Columbia, CA — Following a four-month investigation, a Columbia teen was arrested on a list of charges involving nine victims.

The Tuolumne County Sheriff’s Office received two suspected child abuse reports in April involving the same alleged suspect, 18-year-old Zachary Kuhl. Search warrants were issued for Kuhl’s electronics and at the travel trailer he had been staying. As a result, nine juvenile victims were potentially identified. Eight of those victims cooperated with the investigation, and stated they were coerced into allowing Kuhl to produce child pornography. The investigation showed that Kuhl had intercourse with two juveniles, one of which was three years younger than him.