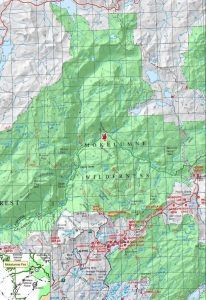 The fire broke out last Thursday, August 18,  just before midnight. The fire is located in very steep, rugged terrain making it not only too difficult but a major safety concern for firefighters to access it. Instead, forest officials report a helicopter and a hand crew made up of 21 firefighters have been stationed to monitor the fire’s behavior, assess historical resources at risk and if possible stop the flames from spreading where they can.  The blaze is burning mostly on the ground but some single trees in its path have been torched. Forest officials also note that the terrain consists of large granite rock cliffs, interspersed with trees, shrubs and numerous snags.

No evacuations have been ordered but due to the steep, rough ground the public is advised to steer clear of the area as a quick escape from flames would be difficult.