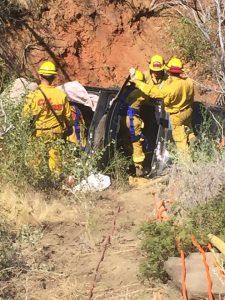 Update 5:20 p.m.: Tuolumne County Sheriff’s spokesperson Sgt. Andrea Benson states, “The third woman who was extricated from the vehicle is being stabilized while enroute to the Sonora Regional Medical Center where they will be met by the air ambulance. All three women sustained major traumatic injuries.” She adds that it was actually search and rescue crew members combing the area on foot that found the crashed SUV down the embankment along Highway 120 as the wreckage could not be seen from the roadway.  (Further details on the incident are below.)

Update at 4:10 p.m.: Tuolumne County Sheriff’s spokesperson Sgt. Andrea Benson has confirmed that the third woman has been freed from the SUV. She did not have information on her injuries. Investigators are still on the scene along Highway 120 east of Buck Meadows where the SUV went off the roadway down a steep embankment. County search and rescue found the vehicle this afternoon. (Further details on the incident are below.)

Update 3:15 p.m.: The CHP is now reporting that just two of the women have been flown from the scene. Emergency crews are still working to free the third woman from the SUV, according to Tuolumne County Sheriff’s spokesperson Sgt. Andrea Benson.

Update at 2:15 p.m.: The CHP reports that all three women have been flown from the scene of the accident off Highway 120.  The women are Monika Shmidt, 63, Maria Fissman, 57, and Reiki Regel, 16, all from Bersenbrueck.  Their SUV was found by the Tuolumne County Sheriff’s Search and Rescue team down a steep embankment.  Tuolumne County Sheriff’s spokesperson Sgt. Benson reports that one of the women was trapped inside of the vehicle and another was ejected. Reiki, the 16-year-old, was able to get out of the SUV on her own. The tourists were from Bersenbrueck, Germany, according to Sgt. Benson.

Sgt. Andrea Benson States, “They were located a half a mile east of Buck Meadows. There are air ambulances responding to the scene to provide aid and transportation.  We don’t have any information on the degree of injuries at this time.”

The women are Monika Shmidt, 63, Maria Fissman, 57, and Reiki Regel, 16. The Tuolumne County Sheriff’s Office was alerted to the missing women last night around 9:30 p.m. when Fissman’s husband and the teen’s mother called worried that the three had not arrived in Groveland where they had all planned to have dinner at around 6:30 p.m. The other members of the group had rented motorcycles and were ahead of the SUV and lost sight of it between Crane Flat and the Yosemite Gates.

Sheriff’s Deputies along with the CHP searched along Highway 120 from Groveland to Yosemite Valley and could not locate the SUV. Additionally, the vehicle’s “On Star” and the women’s cell phones were out of range, unable to ping.  Sheriff’s officials ran a check of the three’s bank cards, which showed no activity.

This morning a plane and Search and Rescue continued to comb the area and the SUV was found. The women are Monika Shmidt, 63, Maria Fissman, 57, and Reiki Regel, 16.