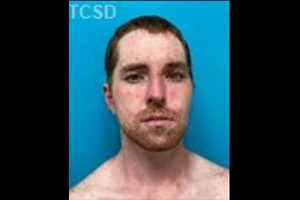 Chinese Camp, CA — A Jamestown man was caught with several homemade devices for stealing gas, and his target was school buses.

A report of vandalism on Wednesday morning brought Tuolumne Sheriff’s deputies to Jamestown Elementary School to view surveillance video of a man stealing gas from a school bus at the Chinese Camp Campus. The video showed the suspect and his vehicle. Once at the campus, the deputy spotted the same man and vehicle from the footage, 29-year-old Spencer Stewart. The deputy also smelled the odor of diesel fuel on him. A record check revealed warrants for Stewart’s arrest.

A search of the vehicle uncovered several fuel cans, hoses, a homemade hand-pump system, a large tank, and drug use paraphernalia. Two plastic tubs under the school bus containing diesel fuel were also found. Sheriff’s spokesperson Ashley Boujikian detailed, “The fuel tank had been drilled into and a fitting that appeared to be homemade had been installed into the tank. Damage to the fuel tank was estimated to be around $1,500, and approximately $195 in diesel fuel had been removed from the bus.”

Stewart was arrested for felony vandalism, possession of controlled substance paraphernalia along with his outstanding warrants.