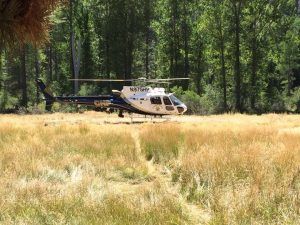 Kennedy Meadows, CA – A hiking trip takes a scary twist for a Bay area man when he falls from a rocky ledge in the Kennedy Meadows area.

36-year-old Andrew Robillard suffered a head and shoulder injury from a 15 ft. tumble that led to him plunging off a 10 ft. granite ridge. He and four friends started their hike from Kennedy Meadows and were heading towards Lewis Ridge and Black Hawk Ridge when the incident happened on Thursday afternoon.  Tuolumne County Sheriff’s spokesperson Sgt. Andrea Benson did not have the details on what caused Robillard’s initial fall but she notes, “One of the hikers activated a Spot Satellite Messenger. The Spot messenger activates both a GPS satellite network to determine the person’s location and contacts a designated phone number for emergencies. Andrew’s wife was contacted in the Bay Area and she called the Tuolumne County Sheriff’s Office, which called in its search and rescue to assist.”  She adds that the whole rescue took about two hours since crews did not have to search for the hikers. (Photos of the rescue are in the upper left-hand image box.)

Using a CHP helicopter from Fresno, Robillard and the hikers were spotted. He was flown to Sonora Regional Medical Center for treatment.