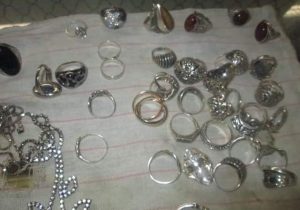 Jamestown, CA — Two men were arrested in connection to a recent burglary in Jamestown, and officials are investigating whether they could be connected to other incidents.

Last week the Time Travelers Antique store was broken into and $6,000 worth of jewelry was stolen. The Tuolumne County Sheriff’s Office reports that the mode of entry into the building was very similar to several other recently reported downtown Jamestown burglaries.

Early yesterday morning, at 4:30am, a Sheriff’s deputy spotted two men walking down an alley near Barendregt Grocery Store. They were wearing dark and multi layered clothing. A deputy questioned the men, 20-year-old Tommy High of Copperopolis and 25-year-old Austin Rodgers of Jamestown, and they were later allowed to leave. The deputy searched the area afterwards and located a duffle-bag containing burglary tools in the vicinity of where High and Rodgers had been walking.

Later that day deputies went to the downtown Jamestown residence of Rodgers to ask further questions. High was also at the location and was on searchable probation. Deputies searched the home and found several thousands-of-dollars-worth of stolen items from Time Travelers.

Both men were booked into Tuolumne County Jail on burglary related charges. An investigation is ongoing into whether the men were connected to other recent incidents.

A third man, 35-year-old Dale Cabral, was also arrested at the residence for misdemeanor drug charges.

Also of note, the Sheriff’s Office reports that High was also arrested on Sunday for possessing methamphetamine and several stolen checks, social security cards and medical cards. He was arrested after being pulled over for a traffic stop on Main Street in Jamestown. He had been released after posting $15,000 bail.