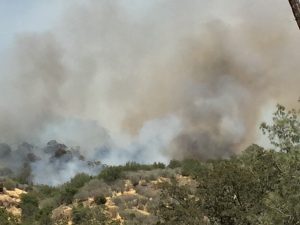 Update at 5:25pm: CAL Fire reports that the forward rate of spread has been stopped on the Baker Fire in Copperopolis. The fire is 60 acres and 40% contained. O’Byrnes Ferry Road remains closed from Reeds Turnpike to Highway 4. CAL Fire reports it is due to heavy fire equipment needing to move through the area. Many of the air resources are now being released from the incident. The cause remains under investigation.

You can view video of the fire taken by Tori James by clicking on the video box in the upper left hand corner.

A special thanks to community news partners Denise Ecroyd, Tonya Adams, Jeri Wagner and CAL Fire for submitting photos. Pictures can be emailed to news@clarkebroadcasting.com.

Update at 4:50pm: A stretch of Obyrnes Ferry Road is closed in Copperopolis due to the Baker Fire. CAL Fire spokesperson Lindy Shoff reports the closure is from Reeds Turnpike to Highway 4. The stretch is approximately 1/2 mile. You will need to find an alternate route. CAL Fire reports the fire remains around 40 acres in size and no homes or structures are considered in danger at this time.

Update at 4:17pm: The Baker Fire in Copperopolis is up to 40 acres, according to CAL Fire. There remains no evacuations, and no threat to any structures. Resources are continuing to ramp up.  There are now 19 engines assigned, one dozer, seven hand crews, air attack, two tankers, two helicopters and four water tenders.

Update at 3:55pm: CAL Fire reports that no homes resulting from the vegetation fire in Copperopolis are immediately threatened and there are no evacuations. There are nine engines assigned, one dozer, five hand crews, air attack, a helicopter, two water tenders and several overhead personnel. Additional resources have been ordered. What sparked the fire is under investigation. The fire is moving towards Copper Mountain and is estimated to be 20-30 acres. CAL Fire has named the incident the “Baker Fire.”

Original story posted at 3:42pm: Copperopolis, CA — Firefighters and Columbia air resources are heading to a vegetation fire in Copperopolis. The flames broke out in the 450 block of Baker Street near O’Byrnes Ferry Road  south of Highway 4. Cal Fire reports 20 to 30 acres of grass are burning moving towards Copper Mountain. Spokesperson Lindy Shoff indicates that nine engines, a dozer, one water tender and two hand crews are enroute with air attack and a helicopter in the skies.  We will bring you more details as soon as they come into the news center.