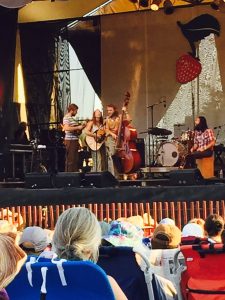 Sonora, CA — More live entertainment will likely be coming to the Westside property in Tuolumne.

The Tuolumne County Planning Commission last night voted 5-0 in favor of issuing a Conditional Use Permit to the Tuolumne Band of Me-Wuk Indians and the TEDA to hold music festivals and other similar type events. The Tribe is hoping to build off the success of last fall’s Strawberry Music Festival.  The organizers had received permission from the county to put on that one specific event. The permit issued last night will provide the flexibility to host multiple events.

Larry Beil with the Tuolumne County Community Resources Agency says no opposition was voiced at yesterday’s meeting, and everyone was complimentary. He adds, “A few people spoke in favor, and there were a few questions from the commissioners about certain aspects, but otherwise everyone was in favor, and the project was approved.”

The overall infrastructure of the Westside property is being improved with enhanced utilities and additional bathroom facilities, and a new portable stage will be brought in for events, and then taken down during the offseason.

The event grounds include 100 acres and can hold up to 6,000 participants. There is also onsite camping.

Of the seven planning commissioners, two did not vote. Dick Pland was absent and Cole Przybyla cited a conflict of interest.

The Conditional Use Permit does not require approval by the Tuolumne County Board of Supervisors.