Invitation to “Meet The Sheriff” 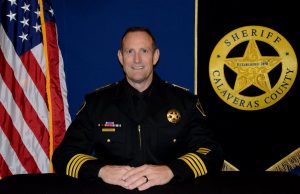 San Andreas, CA — Calaveras County residents will get a chance for some Q&A, one-on-one time with the sheriff.

As previously reported in May, Calaveras County Sheriff Rick DiBasilio was officially appointed to the post by the county’s Board of Supervisors after the untimely death of his predecessor Gary Kuntz, who died of a heart attack last year. With his philosophy of transparency and an open line of communication, DiBasilio is reaching out to citizens by hosting a series of “Meet the Sheriff” events in July and August.

The sheriff’s office provides these dates and times:

If you cannot make the meetings, another way to get to know Sheriff DiBasilio better is by clicking here where you can listen to a recent Mother Lode Views where he was a guest.