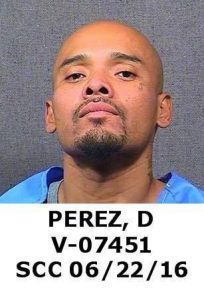 Jamestown, CA — An inmate who walked away from his minimum-security dorm near Jamestown eight nights ago is now back in custody.

Perez, who had been convicted for first-degree burglary, had served the bulk of a 12-year term and was assigned to SCC’s Baseline Camp. As previously reported here, he was last seen during a 10:30 p.m. routine security check on July 10. Acosta states that the inmate will shortly be heading back to SCC, where he will be placed into administration segregation, pending further actions.

Sharing a few of the next steps, Acosta says that Perez is now being interrogated by special service unit officials at the California Institution for Men in Chino. “It is quite a lengthy process that they will go through, to ask him questions to see how he got from Tuolumne County to Los Angeles County,” Acosta remarks.

Perez was previously scheduled for release in November 2019. Once back in the Mother Lode, Acosta adds, “[Perez] will be taken to the Tuolumne County District Attorney’s Office for prosecution on escape charges [which commonly generates] usually two to three years added to the sentence for escaping from an institution — and that would be without giving us any further problems.”