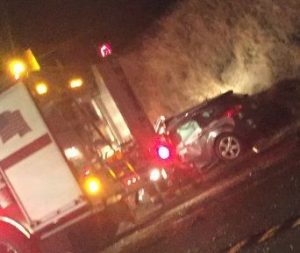 Copperopolis, CA — The CHP reports that a 28-year-old female died in a crash Thursday evening on Highway 4 west of Copperopolis.

A Honda Civic heading westbound crossed into the eastbound lane and collided head-on with a Ford Focus, according to the CHP. The crash occurred on a stretch of Highway 4 in Stanislaus County, west of Milton Road. The driver of the Honda, an unidentified 28-year-old female from Elk Grove, suffered fatal injuries.  A passenger in the Honda, 41-year-old Kimberly Cota of Elk Grove, sustained major injuries and was taken to Doctors Medical Center in Modesto. An individual in the Ford Focus, 23-year-old Laura Murphy of Los Altos, also sustained major injuries and was taken to Memorial Medical Center.

CHP Officer Eric Parsons says, “We are not sure at this time if alcohol or drugs were involved. All of the parties were wearing their safety restraints. The crash is still under investigation.”

The fatal incident occurred around 10:45pm.