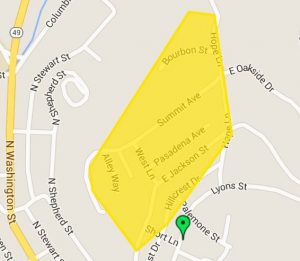 Update at 5:50 p.m.: Sonora Police report that all of the roads off South Washington Street listed below have reopened after a tree fell and brought power lines down with it. Power has been restored to all but seven of the original nearly 145 PG&E customers. The utility estimates the remaining repair time to be complete by around 8 p.m.

Update at 5 p.m.: A tree that brought down power lines in downtown Sonora and cut off electricity to nearly 145 PG&E customers while closing off several roads has been repaired. The incident happened in the 200 block of Hillcrest Drive off of South Washington Street. PG&E reports power has been restored to all but seven customers after being out for nearly three hours. The estimated repair time is 8 p.m.  Sonora Police report some road closures will remain in effect for the next 30 minutes to an hour. Those roads include Hillcrest and East Jackson Street; East Jackson and Hope Lane; and part of Short Lane. Police warn motorists to stay clear of the area. Motorists can use Lyons Street as an alternate route.

Update at 4:00 p.m.: According to PG&E, it has pushed out its estimated time for power to be restored to about 145 downtown Sonora residents who lost their electricity due to a downed tree. The utility now estimates it will take until 8 p.m. for that to happen. According to Sonora Police, road closures remain in effect at Hillcrest Drive and East Jackson Street; East Jackson and Hope Lane; and part of Short Lane.

Original Post at 2:20 p.m.: Sonora, CA — This afternoon Sonora Police are warning motorists of a tree that came down from a private property that brought down PG&E power lines.

Department officials say the incident occurred in the 200 block of Hillcrest Drive off South Washington Street. According to PG&E, the incident is affecting about 145 customers and estimates that it will take until about 4:30 p.m.to restore power within the affected area. While PG&E is on the scene the downed tree cannot be attended to and cleared until the lines are secure and out of the way.

Police report that some road closures are currently in effect. These are at Hillcrest and East Jackson Street; East Jackson and Hope Lane; and part of Short Lane.

Police warn motorists to stay clear of the area. There is no time estimate of how long the closure will remain in effect. A good alternate would be to use Lyons Street.

We will provide further details as they become available.