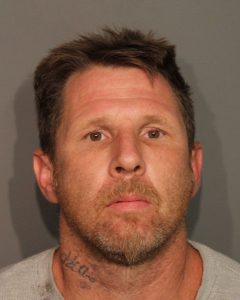 Angels Camp, CA — A Sacramento man wanted on a warrant was booked into Calaveras County Jail after a late-night traffic stop over the tinted windows on his vehicle.

According to Angels Camp Police Chief Todd Fordahl, an officer made the stop Monday evening at around 11:35, near the intersection of North Main Street and Dogtown Road.

Once stopped, according to Chief Fordahl, the driver shared upfront that his driver license was suspended and that there might be an outstanding warrant for his arrest out of Placer County. A records check confirmed the information was true and the driver, 43-year-old Daniel Earl McElfresh of Sacramento, was taken into custody. After receiving consent to search the vehicle, police found a glass methamphetamine smoking pipe; hypodermic syringes; plastic packaging material containing suspected methamphetamine residue along with a digital scale.

McElfresh faces charges of possession and transportation of meth for sales; possession of meth; and driving on a suspended license. Charges are still pending against his passenger, who was transported to Mark Twain Hospital under a medical clearance due to an existing injury and admitted for treatment.