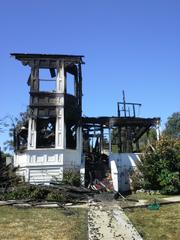 Angels Camp, CA – Angels Camp fire officials report a fire that destroyed a historic home along Highway 49 was accidental and not arson.

As previously reported here, flames ripped through the Victorian home in the early morning of June 16th on the 400 block of S. Main Street in the downtown area. Angels Camp Fire Department Deputy Chief Nathan Pry relayed to Clarke Broadcasting, “The investigation team looked at all possible causes and have ruled out everything with the exception of electrical or improper disposing of smoking or smoldering materials. It doesn’t appear to be an intentionally set fire at all. It’s ruled to be an accidental fire.”

The single family house was reduced to ashes. Pry adds that the damage is estimated at $400,000 for the home and $80,000 for the furnishings. All the residents made it out of the home safely.