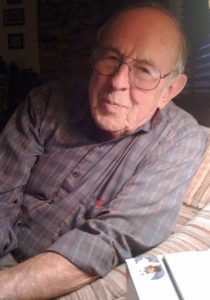 Sonora, CA — Perhaps later this month folks will be gathering to celebrate the life of a colorful Sonoran known for living his own words, “If you live in a community, you need to give something back to it.”

Back in the 1930s before Sonora even had street names —  let alone addresses — Leonard Ruoff, a 12-year-old courier at the time, delivered folks their orders from Millards grocery and the Central Drug Store, the latter of which his father Henry owned.

Developing that ability to remember the people and places of Old Sonora, daughter Sandy Fisher says, served Leonard Ruoff well for a lifetime of volunteer work as a local historian of the region and its film industry. It also turned out to come in mighty handy when, years later, as one of the founding organizers of the Sonora Motion Picture Association, he scouted locations and extras for production companies. This past weekend, those at the Mother Lode Fair may have enjoyed hearing his recollections in a video shown on the making of “High Noon,” one of Hollywood’s best-known movies filmed locally.

At 95, Still A Local History Sleuth

Fisher recounts that Leonard remained an alert active 95-year-old who still drove his Toyota manual shift pickup until he passed away July 1 . “At the Tuolumne County Museum and Historical Research Center, he was always available to help identify people and places within the thousands of photographs brought into the museum — his mind and memory were a vital resource essential to the museum’s success,” she shares.

“He was even writing a response to inquiries of photographs regarding local lumbering equipment used at Westside and Pickering the night before his stroke. When I was visiting with him Monday, he had one more page to do,” she recalls, still a bit shocked at his sudden passing. Warmly, she adds, “He loved his family, friends, neighbors, and Tuolumne County. He enjoyed being able to still remember and tell stories with a sharp mind.”

A fourth generation Californian and third generation Sonoran, he was born at Tuolumne Hospital and lived downtown in part of the Linoberg house with his parents Henry and Hazel; upstairs were grandparents Charles and Cora McCaullay Rudorff. The block served as a family compound of sorts, since the Rudorff family owned it. Great-grandparents William and Henrietta Rudorff made their home on Bradford Avenue, where they ran the Eagle Hotel on Washington Street before the fire of 1852.

Leonard graduated from Sonora Elementary in 1934 and Sonora Union High School in 1939. After attending College of the Pacific (now known as University of Pacific-Stockton) and Pasadena City College in 1942, from which he graduated, Leonard and Henry both registered in the February 16, 1942 draft in San Francisco — enlisting in the Navy as Seabees, due to their construction ability — and were the only father-son duo from Tuolumne County to serve.

Both came home separately with colorful stories to recount from different parts of the world. Ruoff also brought home a wife, Ruth, from Maine, with whom he corresponded through the war. Sandy (Fisher), their only child together, was born in Sonora in 1947 and remained when, a few years later, her mother returned to her home state.

After the war Ruoff worked for his father, who owned Tuolumne County Realty and Insurance, where they bought and fixed up houses to sell or rent. Leonard also repaired equipment being used to build Dodge Ridge, Fisher remembers. Working for another friend in Pasadena, he helped build floats for the Pasadena Tournament of Roses Parade. “I can remember him telling me about driving the floats in the parade and having to be face-down and only being able to see the painted line in the street,” she laughs.

Ruoff also respectively worked for the Westside Logging and Pickering Lumber companies as a machinist and locomotive fireman and had his own Ford tractor agency on the ranch at Edgemont Acres. From 1969 until his “retirement” in 1983 he worked for Curtis Creek School, eventually becoming the transportation director of the Tuolumne, Calaveras and Amador special education programs.

At a College of the Pacific reunion in the late 1960s Ruoff rekindled a friendship with Marjorie, a college sweetheart that Fisher calls his “lasting love.” Married in 1974, the two enjoyed 40 years together before she passed away two years ago. Fisher remembers, “Up until that time, they had traveled in their motor home with friends through the US, Canada and Mexico…and also enjoyed Rhodes Scholar tours to Central America, the Pacific and Europe. After Margie’s passing, Leonard sold their home on Fir Drive and moved to Skyline, so he wouldn’t have to mow any more lawns or do any more cooking.”

Fisher notes that Ruoff  recently received his 70-year pin from the Sonora Elks Lodge that his grandfather Charles helped found and where his own dad was a member. Listed as member #71, his son-in-law Bob is also on the membership roster. A Silver Life Lions Club member, Ruoff also belonged to the Sonora SIRS (Sons In Retirement) and also had a soft spot for Meals On Wheels, personally delivering meals until he was 90. Fisher says she is working with the Elks Lodge to shortly set a celebration of life event date and hopes folks will show up to share their memories of Leonard and recollections of the stories he was known to tell so well.

Fisher shared with Clarke Broadcasting several family and historical photos that may be viewed, slideshow-style, by clicking in the upper left image box.