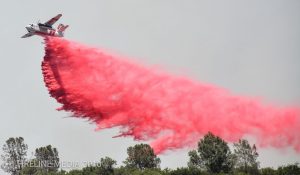 Angels Camp, CA — In just under a week, the Appaloosa Fire has been 100 percent contained.

The flames broke out last Saturday afternoon and the forward rate of spread was stopped at around 310 acres. Air and ground resourcecs battled the blaze as it initially threatened several homes in the area of Appaloosa Road and Pinto Drive near New Melones. At its height, around 260 firefighters were on scene.

Cal Fire reports the fire was ignited by a nearby property owner working on an electrical panel breaker box. The individual has not been identified but was cited for negligently starting a fire and allowing it to spread off his property. The Calaveras County District Attorney’s office has yet to determine whether it will press charges against the land owner.

No homes or structures were damaged.