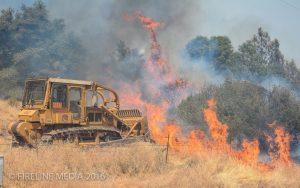 The acreage has held steady at 310 since Cal Fire announced better mapping of the flames on Monday. The fire ignited in some grass on Appaloosa Road about two miles south of Highway 4 last Saturday afternoon.

The cause of the fire has been determined to be electrical. Cal Fire issued a citation to an individual for negligently causing a fire and allowing a fire to spread off his land. The person’s name has not yet been released as fire officials are working with the Calaveras County District Attorney’s Office on the investigation. However, as previously reported, the individual’s identity could be revealed as early as next week.