A Fight In Sonora Resulted In Arrests 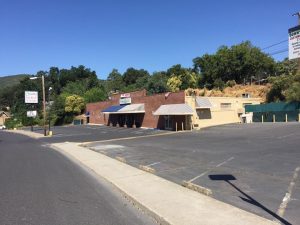 Scene of fight in front of former Bertelli's Pharmacy

Sonora, CA — A drunken brawl outside the former Bertelli’s Pharmacy landed two men in jail for the night — neither involved could tell deputies exactly what caused the fists to start flying.

A caller alerted Tuolumne County Sheriff’s Deputies to a confrontation going on at the Down Town Plaza off Stockton Road in Sonora at 4:30 p.m. Tuesday.  Once on scene, they saw two men punching each other.  One was identified as Samuel Leal, 25, from Sonora and the other as Jonathan Hume, 23, a transient. Both were very intoxicated, according to Sheriff’s officials.

Leal suffered an injury to his arm. Hume became combative with deputies and was put into restraints, which sheriff’s officials referred to as a “WRAP.”  Both men were taken to Sonora Regional Medical Center to be treated for injuries.

Leal and Hume were booked into the Tuolumne County Jail and charged with Public Intoxication. Once they sobered up both were released with a court date early Wednesday morning.