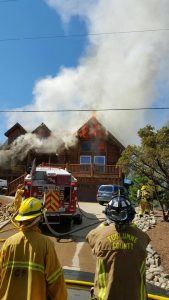 Groveland, CA — Although no cause has yet been determined for a Monday house fire in Groveland’s Pine Mountain Lake subdivision, more details are becoming available.

According to the Tuolumne County Sheriff’s Office, it initially received the report just before 3 p.m. As previously reported here, the location was determined to be on Dyer Court. During the response CAL Fire officials noted that it had committed significant resources to the incident.

According to local officials, the fire somehow ignited inside the three-storey residence while no one was home and was discovered by neighbors, who smelled smoke from inside their home, went outside to investigate and described the flames as emanating from the walls of the home. The fire reportedly caused extensive damage to the house but was successfully contained after several hours and did not damage any other structures.

For onsite photos of the incident, click the slideshow link in the left image box.