Tuolumne County Chase Suspect On The Loose In Oakdale 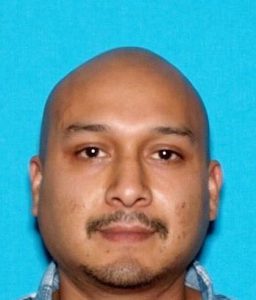 Oakdale, CA — Law enforcement officials in the Central Valley are looking for a man that led Tuolumne County Sheriff’s deputies on a high speed chase yesterday.

The Sheriff’s Office reports that a deputy attempted to pull over a 2000 Saturn driven by 34-year-old Jesus Valdovinos along Chicken Ranch Road in Jamestown. It happened at around 6:20am. The suspect sped away and was followed to the Highway 108 intersection, where he lost control of the car and spun around. He then accelerated toward the deputy’s patrol vehicle, and the deputy was forced to quickly maneuver to avoid a head-on crash.

Valdovinos then sped westbound on Highway 108. Deputies involved terminated the search when he arrived in the populated downtown Oakdale.

However, a short time later his vehicle was spotted by the Oakdale Police Department near the intersection of North 3rd Avenue and East B Street. Valdovinos ran away on foot, while his estranged wife remained inside the car. She cooperated with law enforcement officials and said that she repeatedly tried to get him to stop the vehicle, and was being held against her will. She has a restraining order against her husband.

Then Sunday evening at 7pm, Valdavinos was spotted at the Cost Less Shopping Center at 800 North Yosemite in Oakdale while reportedly asking people for a ride. He ran away when police officers arrived on scene. Anyone with information on his whereabouts should contact the Oakdale Police Department.

He faces an assault with a deadly weapon charge related to his chase in Tuolumne County, and he also has a previous felony warrant for assault out of Turlock.