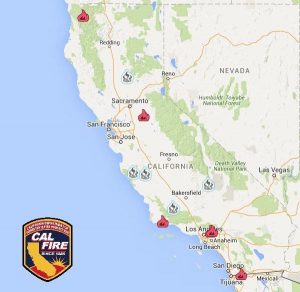 The Camanche Fire, located between Camanche Reservoir and Ione remains at 210 acres and 95 percent contained. Meanwhile, thousands of acres are burning mostly in the south. There is also a forest fire blazing near the California-Oregon border.

In Los Angeles, two incidents — the Fish and Reservoir fires — that both ignited Monday combined earlier today. Now known as the San Gabriel Complex Fire, at last check, a total of 5,400 acres are involved with zero containment and evacuations underway. According to the National Weather Service elevated fire risk due to hot dry air and wind conditions is plaguing the region.

More evacuations being ordered in San Diego, where the Border Fire, now at 7,500 acres, is considered to be five percent contained.

In Northern California, CAL Fire reports that it is also assisting the Forest Service with the Pony Fire on the Klamath National Forest, south of Happy Camp. At last estimation it was described as almost 2,900 acres with 60 percent containment.