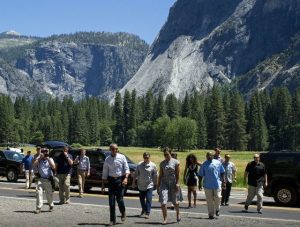 Yosemite, CA — While in Yosemite over the weekend, the First Family took the opportunity to visit popular sites like Yosemite Falls…and hike areas like Glacier Point and Happy Isles.

The White House has released several details about the trip. President Obama, accompanied by his wife Michelle and two daughters arrived via Air Force One at the Castle Airport in Merced County on Friday evening at 6:56pm. From there, they jumped on the Marine One helicopter and were transported into the park and eventually over to their room at the Majestic Yosemite Hotel (Ahwahnee).

Shortly after 11am, the President traveled to the Sentinel Bridge and delivered a 13-minute speech to around 300 dignitaries and members of the media. He spoke about the importance of National Parks, and concerns he has related to climate change. You can view the entire speech by clicking on the “play video” box in the upper left hand corner.

Sunday also began with a morning workout, and the motorcade then left for a tour along the Merced River and eventually to Happy Isles, where the first family took a 2 ½ hour hike. Shortly after noontime, the Obamas returned to the hotel. At 2:16pm, the motorcade left towards the Ahwahnee Meadow landing zone where the first family again loaded up Marine One. From there, they were taken back to Castle Airport, and entered Air Force One at around 3pm. It was the end of their time in Yosemite.

Air Force One touched down at Joint Base Andrews at 10:19pm last night. There was a delay in getting off because it happened to be during the final two minutes of the Warriors and Cavs basketball game. A few seconds after Cleveland’s victory, the First Family jogged down from Air Force One and boarded another helicopter to take them back to Washington, DC.