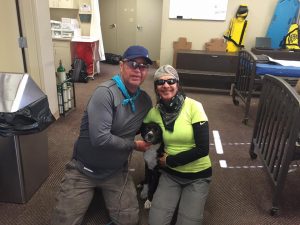 Update at 7:14pm: Here are a few more details on the rescue efforts of missing hikers Donna Hallberg and Mark Smallwood. A helicopter guided the two to Pinecrest Lake, where a boat was waiting to bring them safely back across. The campers who found the pair were able to identify them because they recognized Lulu the dog from pictures shared by the Tuolumne County Sheriff’s Office.  Although the hikers were unharmed, Sheriff’s spokesperson Sgt. Andrea Benson states that they had run out of food and were filtering water to drink. The two reported hearing search helicopters both during the day and at night but were getting discouraged because treecover frequently blocked their ability to signal the craft.

Update at 6:20 p.m.: Tuolumne County Sheriff’s officials have released more details on the search for the missing hikers in the Pinecrest area. Sheriff’s spokesperson Sgt. Andrea Benson reports that Donna Hallberg and Mark Smallwood told rescuers that they became lost on Tuesday. The pair hiked at least 60 miles after they had to divert from their original plan they had mapped out, due to rough terrain and a large amount of snow still in the area. Sgt. Benson adds they continued, using their map to find alternate routes that led them to safety.

Update at 5:20 p.m.: Tuolumne County Sheriff’s officials report two Modesto hikers have been found safe. Picture in the upper left-hand image box show the tearful and happy reunion of the hikers with family members. Sheriff’s spokesperson Sgt. Andrea Benson says searchers arrived by helicopter at the scene where two campers say they had talked to the pair and confirmed that Donna Hallberg and Mark Smallwood and dog Lulu were safe and sound.

Update 4:40 p.m.: Search crews are heading to where Donna Hallberg and Mark Smallwood were sighted by campers. Tuolumne County Sheriff’s spokesperson Sgt. Andrea Benson states, “We received information from campers who came in contact with Mark and Donna at Cleos Bath in Pinecrest. Mark and Donna then made phone calls to their family. We have search crews and the helicopter going to that location now. As soon as we see Mark and Donna we will be able to confirm that we have them and they will be reunited with their family.”

Update at 2:30 p.m.: Additional resources are helping to comb the Pinecrest area for two missing hikers from Modesto. Two helicopters from the National Guard have joined the search along with teams of rescuers being flown in to assist on the ground. There are over 70 people split into 12-15 teams, according to Tuolumne County Sheriff’s spokesperson Sgt. Andrea Benson, who adds that there has been an overwhelming response of citizens offering to volunteer in the search. She explains, “We appreciate the outpouring of concern and kindness but due to the treacherous terrain and large search area and concern for your safety the rescue teams do not need to be diverted to other rescues.”  The search area includes about 117 square miles.

Original post at 10:07 a.m.: Pinecrest, CA — Resources from several surrounding counties are helping in the effort to locate two missing Modesto residents that were hiking in the Pinecrest area.

55-year-old Donna Hallberg and 56-year-old Mark Smallwood ventured out with their small dog Lulu on Sunday. They were headed toward the area of Gem Lake, according to the Tuolumne County Sheriff’s Office. They were due home Tuesday, and when they failed to return, a friend notified law enforcement.

Three helicopters will be utilized throughout today. The Emigrant Wilderness search area is very large with various terrains including steep granite, meadows, valleys, creeks and snow. There are four scent dogs and one trail dog being utilized in the search.