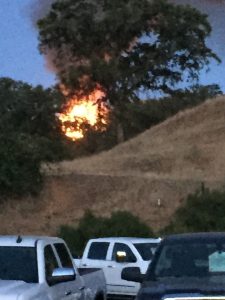 Update at 11p.m.: Cal Fire reports that the vegetation fire has been contained at one acre but the home was totally destroyed. The cause of the fire is under investigation but the fire is not believed to be suspicious, according to Tuolumne County Sheriff’s spokesperson Sgt. Andrea Benson.

Update at 10:45 p.m.: Tuolumne County Sheriff’s spokesperson Sgt. Andrea Benson reports all the residents have returned to their homes.

Update at 10:15 p.m.:  Tuolumne County Sheriff’s spokesperson Sgt. Andrea Benson reports that the residents of the home were able to get out safely. She adds that as a precautionary measure nearby homes on Buck Brush Drive have also been evacuated and Golden Oak Drive has been closed off to traffic. There is no word on what sparked the blaze at this time. Resources on scene included ten engines, one dozer, two water tenders and two hand crews. Assisting in battling the blaze is Sonora and Tuolumne County fire departments, and Cal Fire. The home was destroyed and the vegetation fire remains at one acre with the forward rate of spread stopped, according to Cal Fire.

Update 9:55 p.m: Cal Fire dispatch reports the house was fully engulfed in flames when crews arrived on scene. Cal Fire reports the home is destroyed and the vegetation fire is one acre in size and the flames forward progress has been stopped.

Update at 9:40 p.m.: Cal Fire reports crews are getting a handle on the vegetation fire as  the flames forward progress has been stopped.

Original post at 9:25 p.m.: Jamestown, CA — Firefighters are on the scene of a structure and vegetation fire in Jamestown.

Cal Fire reports the flames broke out at a home in the 10900 block of Buck Brush Drive near Golden Oak Drive and spread to vegetation. There is no word on the size and rate of spread. We will bring you updates as soon as they come into the news center.