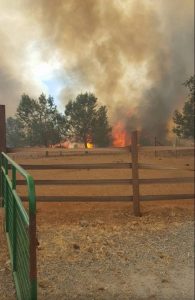 Update at 10:40 p.m.: Cal Fire reports that fire resources continue to make progress on the Cheyenne Fire burning in Calaveras County. While the acreage remains at 83 acres, the containment has grown to 60 percent. Overnight crews will continue working to fully contain the flames, according to Cal Fire Dispatch.

Update at 6:40pm: Calaveras County Sheriff’s officials report roads that were closed, due to the Cheyenne Fire, have reopened and evacuees are being allowed to return to their homes However, Cal Fire continues to report the blaze as only ten percent contained, holding at about 83 acres.

Update at 5:40pm: Calaveras County spokesperson Sharon Torrence reports that the Red Cross evacuation center at Toyon Middle School is closing, apparently because it was determined that it was not needed to support evacuations relating to the Cheyenne Fire in Burson. Cal Fire states that the blaze remains at approximately 83 acres with ten percent containment.

Update at 4:54pm: Cal Fire reports that the Cheyenne Fire is now ten percent contained and recalculated, due to better mapping, from 225 down to 83 acres. Cal Fire spokesperson Lindy Shoff shares that fire officials have determined it was a lawnmower that sparked the blaze.

Calaveras County Sheriff Rick DiBasilio reports that currently Camanche Parkway is open but that Arapaho Way, Steadman Ranch Road, Cheyenne Way and Cobb Lane are closed. The Sheriff cautions those in the area to be cognizant of where the flames are spreading, adding that his dispatcher is hearing that Cal Fire seems to be getting “a good handle” on the blaze.

Update at 4:40pm: Calaveras County spokesperson Sharon Torrence reports that county staff has set up the Cheyenne Fire evacuation center at Toyon Middle School on Double Springs Road and that Red Cross is on the way to take over command operations there.

Update at 4:10pm: There is still no containment on the Cheyenne Fire, which firefighting units are continuing to hold at approximately 225 acres, according to Cal Fire. The Red Cross is in the process of setting up an evacuation center at Toyon Middle School (3412 Double Springs Road). There is no word on what number of residents have evacuated.

Update at 3:30 pm: In an exclusive Clarke Broadcasting interview with Cowgirl Up Ranch owner Marybeth Wiefels,whose property is near the heart of the Cheyenne Fire, Wiefels provides the following eyewitness account…

“I heard either two gunshots or pops…and some…male voices hollering and then a couple of people then went running up off the hill — and then the fire started, and that is what [fire officials] will be investigating,” Wiefels shares, adding that the fire may have started on her or the back acreage of her neighbor’s property. “It is really windy and [the fire] burnt all the properties out here…we’ve lost some outbuildings.” From her perspective, Wiefels estimates that the fire was mainly running between Navaho and Arapaho ways. The fire spread so fast, she says, where she was, there was no time for large animal evacuations but they did manage to get a couple of their elderly neighbors out. “The fire was on top of us — we just went with our fire plan, which is to get [the horses] in the cleared out pasture,” she states. In the process of evacuating extra hands and small animals when she signed off with us, Wiefels says she plans to remain in place.

Update at 3:20pm: Cal Fire reports the acreage has grown from 50 to 225 acres. Additionally, the CHP reports Arapaho Way at Cobb Lane is closed.

Update at 3pm: The CHP reports Camanche Parkway has been reopened to traffic.

Update 2:45pm: Cal Fire reports two outbuilding have been destroyed. However, the fire’s size is holding at 50 acres and some of the aircraft has been released, according to Cal Fire.

Update at 2:15pm: The CHP reports that, due to the Cheyenne Fire in Burson, located in the 12000 block of Cheyenne Way near Arapaho Way, Camanche Parkway is closed at Burson Road. The fire is now described by Cal Fire as 50 acres in size. Evacuations continue. Residents are asked to avoid the area and allow the fire crews to safely work. According to the CHP San Andreas Unit, Highway 12 in the area is open.

Update at 2:04 pm: Cal Fire reports containment on the earlier reported vegetation fire near Don Pedro in the 9700 block of Rastro Way near Laredo Drive (see below). At last check the size estimate of the blazes, located between Lake Don Pedro and Lake McClure, was estimated at 12 to 15 acres in size. No cause has yet been determined.

Update: at 1:47pm: The Calaveras County-based fire that broke out just before 1 p.m. is now described as being at 16 to 21 acres and located in the 12000 block of Cheyenne Way near Arapaho Way.  It has been named the Cheyenne Fire. As structures are threatened, evacuations continue. A road closure was just ordered for Highway 12 at Burson Road.

Update at 1:28pm: Cal Fire reports that forward progress has been stopped on the fire near Don Pedro in the 9700 block of Rastro Way near Laredo Drive. The blaze, located between Lake Don Pedro and Lake McClure, is now described at 12 to 15 acres, threatening one structure. The Columbia air tankers have been released.

Update at 1:24pm: There are some evacuations underway in Calaveras County due to the vegetation fire in the 12000 block of Cheyenne Drive near Pattison Road. It is in the Burson area in the vicinity of Lake Camanche. There is currently not a size estimate, but the Calaveras County Sheriff’s Office is evacuating some of the nearby homes. We’ll pass along more details when they become available.

Original story posted at 1:15pm: Fire resources are heading to two fires….one in Mariposa County and the other in Calaveras County, which both broke out around 12:50 p.m.

Cal Fire reports four engines, a dozer, Columbia Air Attack and one helicopter are on the way to a vegetation fire near Don Pedro in the 9700 block of Rastro Way near Laredo Drive. It is between Lake Don Pedro and Lake McClure.

Seven engines, a dozer and two hand crews are heading to another vegetation fire in the 12000 block of Cheyenne Drive near Pattison Road in Burson. There are no details related to size, rate of spread or whether any structures are threatened in the either fire at this time. We will bring you more details as soon as they come into the news center.