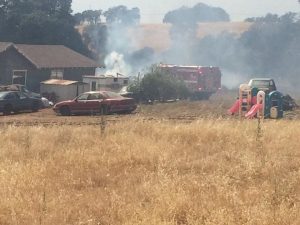 It ignited Friday afternoon at around 3:25pm in the 4000 block  of Avenida Lugo Road. Investigators found that it was sparked by someone using a weed eater in dry grass. The estimated dollar damage is listed at $1,900 for the structure and $600 for the vegetation. There were no injuries reported. Fire officials remained on scene Friday until 7:30PM.