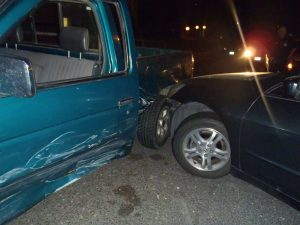 Update: The charge of felony assault with a deadly weapon initially placed against Roy was later dismissed in court.

Original story: Sonora, CA — A vehicle accident that sparked a chase and ramming incident wound up with two arrested —  one for using his vehicle as a deadly weapon.

Sonora Police officials say just before 10 p.m. Wednesday officers responded to a report of a two-vehicle crash in the 100 block of Hospital Road with an altercation in progress.

According to the police report, Sonora resident Christopher Metcalf, 25, had been headed west on Mono Way in a 1997 Green Nissan pickup when he ran a red stoplight at the intersection of Mono Way and Greenley Road and hit a 2007 Honda Accord driven by Daniel Roy, 34, of Angels Camp. Police state that, as Metcalf fled the scene in his pickup, Roy gave chase in his sedan and began ramming Metcalf’s truck from behind.

Attempting to evade his pursuer, Metcalf turned and traveled the wrong way down Hospital Road but Roy followed, causing Metcalf’s vehicle to spin out and hit a parked vehicle. Roy then rammed the driver’s side of Metcalf’s truck and pinned it against a brick wall.