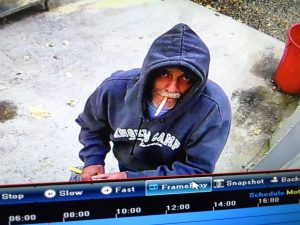 Sonora, CA — The theft happened in Yolo County but what the thieves were wearing on security video suggest they could be from the Mother Lode.

Calaveras and Tuolumne County Sheriff’s officials have released photos of the suspects, which are in the upper left-hand image box, in hopes someone in the area might recognize both or one of the suspects, especially since one has on a hoodie with Angels Camp emblazoned across it. The men are wanted by the Yolo County Sheriff’s Office for burglarizing the Elkhorn Fire Department located on Old River Road near West Sacramento on June 1st around 7 a.m. The security camera footage shows the thieves and their get-a-way truck loaded with stolen equipment and tools, including the Jaws of Life used to free trapped victims in vehicle crashes.

Yolo Sheriff’s officials report they have yet to identify the suspects but with the release of photos to the Mother Lode that might change.  Anyone who may know the suspects or have information regarding the crime is asked to call Detective Hayes at (530)668-5232.