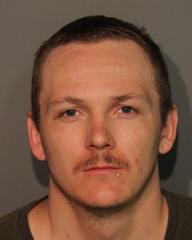 Angels Camp, CA — The suspect punched a man who he believed to be a witness set to testify against one of his relatives.

An Angels Camp Police Officer responded to a report of a man attacking another male while walking along the 300 block of North Main Street around 9:15 p.m. Monday. The victim told the officer a stranger approached him and threatened him not to testify against the suspect’s family member. Then he began punching the victim in the face and chased him as he tried to run away to get help.   The victim was able to call 911 from a nearby business.

An investigation, led detectives to 26-year-old Kenneth Peterson of Angels Camp, who was arrested and booked into the Calaveras County Jail for Witness Intimidation and Battery charges.

Angels Camp Police have not released further details as to what family member Peterson was referring to or whether the man he attacked was actually the witness that would be testifying.