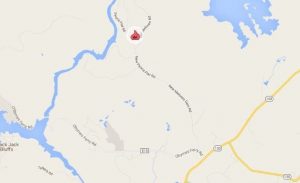 Update at 7:45pm: CAL Fire is now estimating that the Tulloch Fire is 85 acres and 30% contained. The reduced size estimate is the result of better mapping. Earlier, firefighters on the ground were estimating that the blaze was 100-plus acres. Crews will remain on scene through the night and well into Tuesday. No homes or structures are considered in danger. What started the fire remains unknown.

A special thanks to our community news partners Amy Gladen, Jim Devoll, Mark Truppner and Tamara  Hansen for e-mailing photos. Pictures can be sent to news@clarkebroadcasting.com.

Update at 6:25pm: Fire crews will remain on scene through the evening battling the Tulloch Fire in Tuolumne County. Earlier today CAL Fire reported that five air tankers were assigned to the incident, but the number is now down to two as crews are making progress. The latest size estimate is still “100-plus” acres and there is no containment estimate, according to CAL Fire Spokesperson Lynne Tomalchoff. No homes or structures are considered in danger at this time.

Update at 5:15pm: CAL Fire officials are still saying that the Tulloch Fire is “100-plus acres” and there is no containment estimate. However, the positive news is that some of the aircraft assigned is beginning to be released from the incident, which is a sign that firefighters are getting a handle on the blaze. No structures are considered in danger, according to CAL Fire spokesperson Lynne Tomalchoff. What sparked the fire is still under investigation.

Update at 4:35pm: CAL Fire spokesperson Lynne Tomalchoff reports that the latest estimate for the Tulloch Fire is that it remains 100-plus acres. She says, “There are around 125 personnel out on the fire at this time. Access to the fire is a little bit difficult. It is in some steep terrain in a canyon area.”

At this time there is no containment. The fire is in an isolated area between Lake Tulloch and New Melones. It is situated in Tuolumne County.

Update at 4:15pm: CAL Fire reports that a vegetation fire situated in an isolated area off Tulloch Lake Road is now 100-plus acres. CAL Fire says the blaze is in a river canyon situated between Lake Tulloch and New Melones. 15 engines, five air-tankers and a helicopter are assisting with the fight.

Original story posted at 4pm: Calaveras County, CA — Air and ground resources are on scene of a vegetation fire in the area of Tulloch Lake Road.

The fire is visible from several surrounding communities. Initial estimates put the fire in the 50-plus acre range.