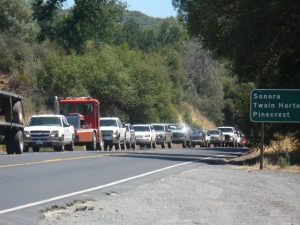 Sonora, CA — AAA estimates that over 4.6 million Californians will travel over 50 miles this weekend, which would be the highest number since 2005.

It would also mark a 2.5% increase from a year ago. AAA of Northern California Spokesperson Cynthia Harris says, “The beginning of summer has officially begun with millions of Californians ready to hit the roads, spurred by lower gas prices and growing optimism in the country’s economy. This season’s record high travel volume is a good barometer as to what we can expect for the rest of the year.”

The California Highway Patrol will have all available officers on the roadway as part of a Maximum Enforcement Period. It will run from 6pm Friday through 11:59pm Monday. San Andreas based CHP Officer Rebecca Myers says, “We’ll be trying to get traffic moving at a safe pace and getting people to their destinations safely. If that calls for us writing citations, we’ll be doing that.”

The CHP notes that 31 people died in vehicle accidents during last year’s Memorial Day weekend MEP and 2/3 of those individuals were not wearing seatbelts. The CHP will also be looking for DUI and distracted drivers.

Area mountain passes, such as Highway 108 Sonora Pass, Highway 120 Tioga Pass and Highway 4 Ebbetts Pass, are all open this weekend.