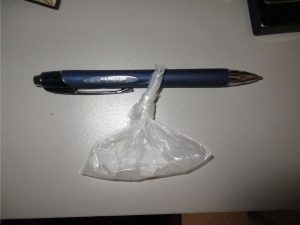 Jamestown, CA — A deputy that stopped to check on a car parked on the side of the road in Jamestown nabbed two people for narcotics; one a paroled murderer.

The arrest took place Thursday around 2:53 p.m. on 5th Avenue when the deputy noticed a Hyundai parked on the side of the road. He pulled over and questioned the driver, 29-year-old Alejandro Guzman from Mountain House and his passenger, 30-year-old Michelle Coughennower from Roseville. The deputy ran a records check on the pair, which revealed that Guzman was on parole for murder.  That allowed for a search of the car that uncovered a baggie containing 6 grams of methamphetamine inside an ashtray. Sgt. Andrea Benson did not have any details on his murder conviction.

Coughennower posted her $20,000 bail and was released.