Fairgoers Frolic In Frogtown Despite Not So Fair Weather 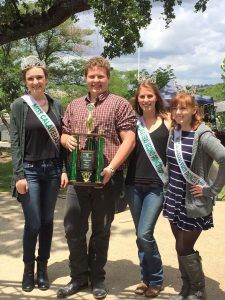 Angels Camp, CA — Even with iffy weather on Friday, fair officials say that attendance at this year’s Calaveras County Fair and Jumping Frog Jubilee seems slightly up so far.

The fair’s front office, way too busy to gather much in the way of statistics, did share that shoppers’ purchases from the vendor displays and food sales on Thursday were respectively up by eight and 18 percent from last year.

Around noontime Friday, a sky full of uber billowy clouds cast gray shadows through which patches of blue sky and bright sun made intermittent peeps. Briskly waving flags and pennants signaled the late season storm advisory for the Sierra Nevada in effect. As business picked up at the gate, a gaze about the fairgrounds revealed building foot traffic and even a few dozen folks relaxing on the lawn, as the scheduled day events drew small audiences.

In addition to bragging rights, Minehart picked up a $100 prize check, a sizable trophy and the opportunity to sing a tune or two before Friday’s Main Stage headliner, Little Texas, takes the stage at 8 p.m. (To view images from early Friday fair activities click the slideshow in the upper left image box.) To view fair schedule activities, click here.