Meth Packs And Stacks Of Cash 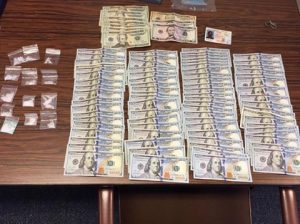 Jamestown, CA —   A Jamestown man arrested for drugs was able to post his bail before sheriff’s deputies were able to search his home and discover a significant stash.

A Tuolumne County Sheriff’s Deputy spotted a suspicious car parked outside Railtown 1897 State Park just after 10 a.m. Thursday. He stopped and while questioning the driver, 49-year-old Randall Saari, the deputy detected the smell of pot coming from his 2003 Toyota Camry. A search of the car found 15.4 grams of methamphetamine packaged for sale, $7,860 in cash, and marijuana residue on the floor board. Saari was arrested for possession for sales and transportation of methamphetamine.

Shortly after being booked into the Tuolumne County Jail, Saari was able to post his $10,000 bail before Tuolumne Narcotics Team Detectives got a search warrant for his 7th Street Jamestown home. That netted an additional 28.7 grams of methamphetamine, 52 grams of marijuana packaged for sale, drug use paraphernalia, and $50,040 in cash. Sgt. Deborah Moss reports that the total $57,900 in cash was seized as a “narcotic asset forfeiture”, which will force Saari to prove the money came from a legitimate source to get the funds back. She adds the investigation is ongoing.