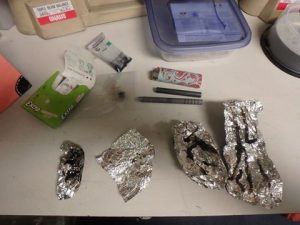 Confiscated During Arrest At Walmart

Sonora, CA — A Murphys woman was arrested after stealing over $1,500 worth of merchandise from the Sonora Walmart and being in possession of heroin.

The Sonora Police Department reports that 31-year-old Kayla Maxwell loaded up two carts with goods and pushed them out of the store. The Police Department was notified and responded. Maxwell gave officers a false name and claimed to have purchased the items. A review of surveillance video proved that Maxwell had stolen the items. The officers also found that Maxwell was in possession of 1.4 grams of heroin and drug paraphernalia.

The incident happened on Sunday evening around 11:30.